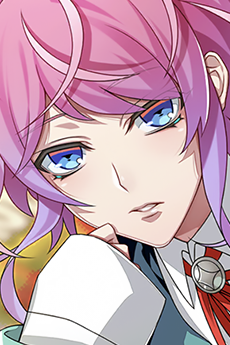 __Age:__ 24 __MC Name:__ easy R __Division:__ Shibuya __Birthday:__ February 14th __Solo Song:__ drops __Quote:__ The optimist sees the doughnut, the pessimist sees the hole. One of the four former members of The Dirty Dawg and current leader of Fling Posse alongside his teammates, Arisugawa Dice and Yumeno Gentaro. Despite his child-like appearance, he's quick-witted and is able to get a total understanding on how others perceive him. He livens up the scene with his innocent appearance, but ends up saying unnecessary things, and his natural airheadedness causes him to misread the atmosphere. By nature, he doesn't really enjoy the company of others, but his cute demeanor allows him to be endearing to all. Regardless of age, he refers to all women as "onee-sans" (lit. "big sisters"). Although he's popular and charismatic, he doesn't really have any meaningful relationships. He always carries candy with him, and will happily share with anyone who gives him a pat on the head. Ramuda does have a tendency to be sly and manipulative to get what he wants. Despite his carefree and child like behavior, he changes demeanor completely when upset. He suddenly becomes more serious and uses his natural, much deeper voice. He's extremely hostile towards Jakurai Jinguji and both parties blame each other for the downfall of The Dirty Dawg. He seems to be aiding Kadenokouji Ichijiku in keeping an eye on the other divisions. She's aware of Ramuda's true nature. However, neither Gentaro or Dice are aware that Ramuda is in touch with her. (Source: HypMic Wiki)